Roubini Says Eurozone ‘Wreck’ May Force Greece Out in Year 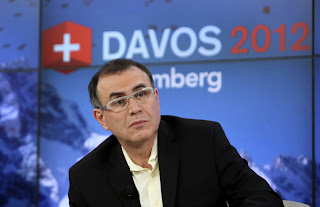 Nouriel Roubini, the New York University economist who predicted the financial crisis, said Greece will probably leave Europe’s single currency within 12 months and could soon be followed by Portugal.

“The euro zone is a slow-motion train wreck,” Roubini said in a panel discussion in Davos, Switzerland today. “Not only Greece, other countries as well are insolvent.”

Roubini said he sees a severe recession in Europe and a 50 percent probability “that over the next three to five years the euro zone will break up.”

“Not all the members are able to stay,” he said. “Greece and maybe Portugal may exit the euro zone --Greece within the next 12 months. Portugal may take a while longer.”

More
Posted by Yulie Foka-Kavalieraki at 11:16 AM