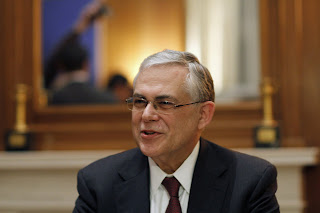 Greek Prime Minister Lucas Papademos said he has the backing of leaders from the three political parties supporting his interim government as international creditors increase the pressure on Greece to make deeper spending cuts to secure new funding.

The party leaders are in “complete agreement” with the government on continuing talks with private and international creditors, the prime minister said in a statement today after meeting in Athens with George Papandreou of the socialist Pasok party, New Democracy party chief Antonis Samaras and George Karatzaferis, head of the Laos party. Talks “aren’t easy,” he said before flying to Brussels to meet European leaders.

“If this process isn’t successfully concluded then we face the specter of bankruptcy with all the dire consequences for society that entails,” Papademos said the e-mailed statement.

European leaders meet in Brussels tomorrow to draw up rules to strengthen governance of the euro region after Greece (GDBR10) sparked a wave of financial turmoil that still threatens to splinter the euro area. With Greece struggling to meet the terms of bailout agreements struck over the past two years and facing a 14.5 billion-euro ($19 billion) bond payment March 20, policy makers are discussing plans to directly intervene in Greek budget decisions, two euro-region government officials said yesterday.

That prospect has been rejected by Finance Minister Evangelos Venizelos, officials from all Greek parties supporting Papademos, as well as other parties represented in parliament.