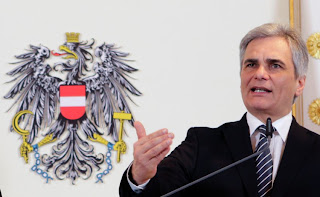 In a SPIEGEL interview, Austrian Chancellor Werner Faymann, 51, expresses doubt about Germany's strategy in combatting the euro crisis, discusses the potential need for a larger Greek bailout package and says that the ECB may have to contribute to debt relief for Athens.

Faymann: I certainly wouldn't promise my parliament that we could get by on €500 billion. My government is prepared for the present EFSF bailout fund and the ESM to overlap in a way that we erect a higher firewall. My finance minister, incidentally, sees it that way too, and like Ms. Merkel, she belongs to the conservative European People's Party.

SPIEGEL: Do you want the billions that remain in the European Financial Stability Facility to be combined with the ESM?

Faymann: It should move in this direction. That way we would come out with €750 billion. The financial markets are observing us very closely, and judge our strength by the height of the firewall. If it's too low, then we give the markets a reason to speculate against us.

SPIEGEL: At the European Union summit in December, you said the European Central Bank (ECB) must gain "additional flexibility" for market intervention. What did you mean exactly?

Faymann: If we manage to get debt brakes into the constitutions of member states and maintain stricter controls on frugal budgetary policy, then we need to take the next step toward further safeguards. I am therefore in favor of the ESM being granted a banking concession, enabling it to refinance with the ECB.

Faymann: I have a different opinion. One has to also tell the countries that have been forced into this severe corset what the benefits of collective protection will be afterwards.