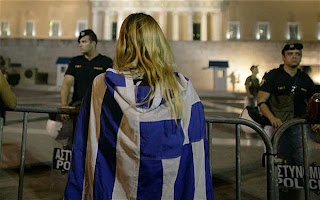 With the country on the brink of a default, Christine Lagarde, the director general of the IMF, said that a new "fiscal compact" was set to be signed by European Union members at the vital leaders' summit on Monday that would centralise budgetary powers.

The IMF made it clear that the fiscal compact was concerned with future budgets and not the present bail-out.

Greece is under increasing pressure to give up control of its budget. A document released over the weekend revealed German proposals to force Greece to pass all its spending decisions with a "budget commissioner".

In an angry reaction from the Greek government, the education minister, Anna Diamantopoulou, a former EU commissioner, slammed the idea as "the product of a sick imagination" in an interview with local television.