Hopeful or hopeless? Europe struggles to find a strategy to grow out of its debt crisis 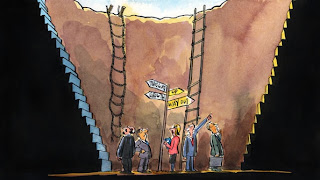 The buzzword in Brussels these days is “growth”. Perhaps the looming recession across much of Europe is concentrating minds. Or leaders may realise that the prospect of years of austerity is stirring bad blood. Unless the debt crisis was resolved and growth recovered, said Christine Lagarde, the IMF’s head, Europe and the world risked reverting to the 1930s. At their next summit on January 30th, European Union leaders will solemnly talk of boosting output, tackling youth unemployment, supporting small firms and much else. They might even commit money to job creation, for example by recycling unspent EU funds through the European Investment Bank.

Do not be fooled by such pieties. Everybody has different ideas about growth and they often reflect longstanding prejudices. For Germany, fostering growth is not about spending more money, but about fiscal discipline and structural reforms in weaker countries. For France, the priority is to curb “disloyal” competition, by harmonising taxes to stop low-tax states (eg, Ireland) taking business away from high-tax ones (eg, France), or stopping Britain from imposing tougher rules on its banks that might make them seem safer than French ones. For the British, Dutch, Swedes and other north Europeans, growth should come from the boost to competition from deepening the single market and pursuing free-trade agreements. For ex-communist countries in the east, the secret is the vital role of EU transfers.

Beyond papering over such disagreements with official verbiage, the main business of the summit will be to push ahead with the “fiscal compact”. This requires the signatories to adopt balanced-budget rules. “They are going to sign a treaty that makes Keynesianism illegal,” comments one diplomat. Mrs Lagarde, for her part, seems to lean the opposite way. Her recommendations for growth include easing monetary policy; relaxing deficit-cutting in surplus countries, such as Germany, that can afford to boost demand; and ensuring that banks keep lending. She is also urging the euro zone to increase the size of its rescue fund. And she makes the case for a Europe-wide system to support banks and for the mutualisation of some sovereign debt.

Mrs Lagarde’s words will fall on deaf ears in the country that most needs to hear them, Germany. So is Europe doomed to paralysis? A World Bank report on Europe, launched this week, tries to sound optimistic. As the report’s main author, Indermit Gill, puts it, “America has taken in poor immigrants and turned them into high-income individuals. The European Union has taken in poor countries and turned them into high-income countries.” Its economic model is valid, even if it needs reform.