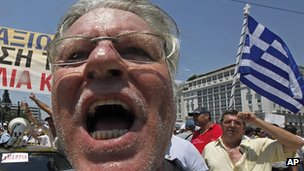 Greece has rejected outright German proposals for the EU to hold power over its budget.

Culture Minister Pavlos Yeroulanos told the BBC it would be "impossible" for Greece to cede control of its tax and spending powers.

There are concerns the measures Greece has taken to cut its budget deficit have not gone far enough.

Meanwhile, Greece and its private creditors are close to a deal to cut dramatically the country's debt levels.

Charles Dallara and Jean Lemierre, representing the creditors, said on Saturday they were "close to the finalisation" of a deal that would see banks and investors write off about 50% of money they are owed.

They said a deal, which is necessary for Greece to receive much-needed further bailout funds, should be agreed this week.

On Sunday, Greek Prime Minister Lucas Papademos said he and his coalition partners were in "complete agreement" over the positions to adopt in the talks, both with private creditors and with the EU and International Monetary Fund officials over any subsequent bailout.

He said delays in cutting Greece's budget deficit had led to demands for greater austerity measures.