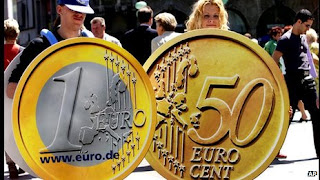 Greek officials have reacted angrily to a leaked German proposal for an EU budget commissioner with veto powers over Greek taxes and spending.

The Greek government said it must remain in control of its own budget.

The European Commission says it wants to reinforce its monitoring of Greek finances, but Greece should retain sovereign control.

Meanwhile, Greece and its private investors are close to a deal which will pave the way for a second bailout.

Greek government spokesman Pantelis Kapsis told the BBC the discussions between the two parties had gone well and they were "close to an agreement".

Greece must reach agreement in the next few days in order to receive the next tranche of funds from its first bailout.

It needs the money to pay off a significant number of bondholders whose bonds mature in March. Without the bailout funds, Greece could be forced into an uncontrolled default from the euro.

More
Posted by Yulie Foka-Kavalieraki at 11:32 AM