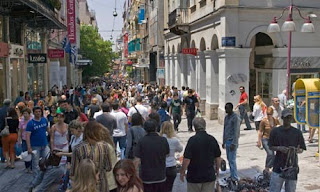 In recent weeks Antonis Megoulis, who heads the national confederation of Greek commerce, has been playing spot the shopping bag.

Standing on Ermou, an Athens street that once commanded Europe's highest rents from retailers, he counted the number of shopping bags carried by passersby. "If you do it yourself you will see there are hardly any at all," he said. "Consumers are out there looking but no one is buying."

As winter sales began in Greece, Ermou was certainly bustling, but even with prices slashed by as much as 70%, cash-strapped Greeks were still more interested in window shopping than snapping up goods.

Consumers suffering wage and pension cuts, rising inflation and a recession of a severity not seen since the second world war ensured that shops had one of their worst Christmases on record, with retail sales down 30% on the previous year.

"It couldn't be worse," said Megoulis. "Our monthly surveys are shocking reads. Sales are down, businesses are closing every day and there are no signs of optimism on the horizon."