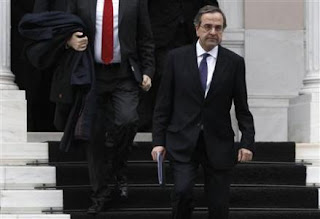 Attention is shifting to negotiations with Greece's international lenders who want proof that the Papademos coalition will take action on reforms before they hand over funds from a 130 billion euro bailout.

Greece needs the money to avoid a chaotic default when big bond redemptions fall due in March. However, in a sign that the talks will be tough, German Economy Minister Philipp Roesler openly called for Athens to surrender control of its budget policy to outside institutions if it cannot implement the reforms required under the euro zone rescue package.

Such suggestions have raised hackles in Greece and Papademos made clear how hard the talks with its lenders, the IMF and European Union, would be.

"The negotiations are not easy," he said in a statement after meeting the heads of the three parties in his government.

"Despite progress on stabilizing the economy, despite the significant changes and the great sacrifices, deviations from targets and repeated delays in the implementation of specific policies have resulted in our partners setting more terms and commitments."