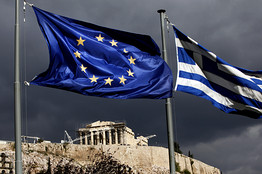 You’ll no doubt remember all the excitement at the end of October when European officials, toiling into the wee hours of the morning, came up with a Plan to Have a Plan to Save the World. Stocks jumped. The lion lay down with the lamb.

Since then? Bupkus. And the US stock market has, appropriately enough, gone nowhere — less than nowhere, actually, with the Dow down about 3% since its peak after the Plan’s detail-free announcement.

“Barely a month ago we had the grand plan announced by officials only to have the pundits reveal the deal was vague at best, empty at worst,” wrote David Ader, head of government bond strategy at CRT Capital. “In the subsequent three weeks we’ve had nothing, literally nothing, that further defines or refines any plans.”