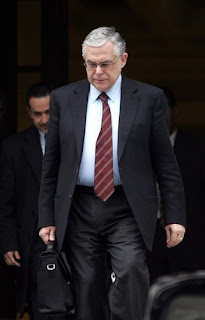 As Greece tries to reach a debt-swap agreement with its private creditors, the country’s prime minister suggested on Sunday that the three leaders in his fractious coalition were prepared to back additional austerity measures and reforms needed to receive a second bailout.

Prime Minister Lucas Papademos had sought agreement among the coalition partners on the broad outlines of a deal with private creditors to erase $130 billion of debt as well as a recovery plan suggested by the European Commission, European Central Bank and International Monetary Fund, collectively known as the troika.

“We are in absolute agreement as regards the continuation of negotiations and the positions that we will support,” Mr. Papademos said, referring to talks between government officials and the troika.

Athens also reported progress over the weekend between Greece’s political leadership and Charles Dallara of the Institute of International Finance, the bankers’ lobby representing most investors, over how much of a loss the private sector creditors would be willing to accept on their bond holdings.