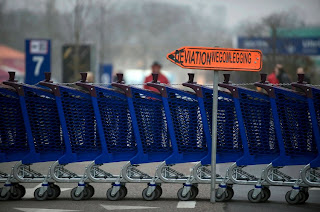 German Chancellor Angela Merkel had hoped that Monday's EU summit would focus exclusively on finalizing her plan to impose budget discipline across the 27-member bloc. Problems in Greece, however, may hijack her headlines.

It will be the 17th European Union summit in the last two years focused on the ongoing debt crisis on the Continent. And it may be the most difficult one yet -- at least when it comes to getting there.

With Chancellor Angela Merkel, French President Nicolas Sarkozy and 25 other heads of state and government from across Europe set to arrive in Brussels in the early afternoon, disgruntled Belgian workers have chosen Monday for a nationwide strike. The work stoppage -- which has left travelers stranded and the public transport system at a standstill -- started late on Sunday and is set to continue for 24 hours. Workers are protesting deep austerity measures passed in the country, similar to belt-tightening packages that have triggered social unrest across the Continent.

Some measure of relief, though, may be in sight. With several European economies suffering because of the far-reaching consolidation policies put in place last year, leaders are reportedly hoping to agree on a summit communiqué calling for "growth-friendly consolidation and job-friendly growth." According to Reuters, EU leaders may announce their intention to use €20 billion ($26 billion) of unused funds from the 2007-2013 budget to promote job creation programs.

But that is likely to be just a footnote in a summit that, in addition to passing Chancellor Angela Merkel's fiscal pact mandating budgetary discipline, will almost certainly focus on the ongoing problems in Greece.

And those problems, it would seem, are only getting worse. SPIEGEL has learned that the so-called troika, made up of the European Commission, the European Central Bank and the International Monetary Fund, now believes that Greece requires €145 billion in aid money to remain solvent through 2014, fully €15 billion more than the €130 billion bailout package currently being negotiated between the EU and Athens. The increase is largely a function of Greece's struggling economy, which performed even worse than expected in 2011.