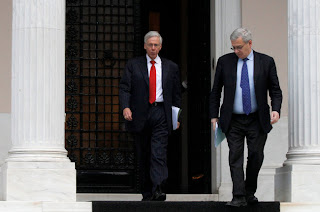 Greece once again appears on the verge of reaching a deal with its private sector creditors on how much of a loss they would be willing to accept on their bond holdings.

The latest progress comes in the wake of two days of talks in Athens between Greece’s political leadership and Charles Dallara of the Institute of International Finance, the bankers’ lobby representing most investors.

Bankers and officials involved in the discussions who were not authorized to speak publicly say that bondholders have made significant concessions with regard to the interest rate, or coupon, that the new Greek bonds would carry. Having insisted previously on an average rate above 4 percent, creditors now seem willing to accept a rate below 4 percent for the 30-year bonds — perhaps as low as 3.6 percent.

The discussions are expected to continue through the weekend, and officials said some type of announcement could come Saturday or Sunday.