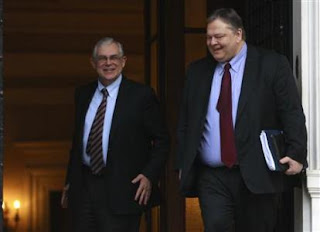 Greece and its private creditors worked on stitching together the final bits of a complex debt swap agreement Saturday, amid growing optimism a deal will be clinched in time to avert an unruly default.

After weeks of muddling through round after round of inconclusive talks, the negotiations appear to be in their final phase, though it was unclear if a preliminary deal could be secured in time for Monday's European Union summit.

Still, for Athens, progress on the debt swap front is at risk of being overshadowed by increasingly problematic talks with its foreign lenders, whose inspectors are in town demanding unpopular reforms that no politician wants to be linked to.

"Today will be another tough day," said George Karatzaferis, leader of the far-right LAOS party, one of three parties in Papademos's emergency coalition government. "We will see whether we can bear the burden that lies ahead."