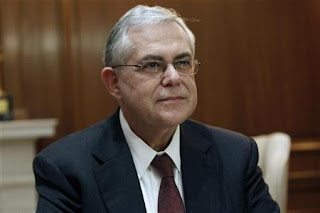 Greece and its private creditors head back to the negotiating table on Saturday to put together the final pieces of a long-awaited debt swap agreement needed to avert an unruly default.

After weeks of muddling through round after round of inconclusive talks, the negotiations appear to be in their final phase with both sides hoping to secure a preliminary deal before Monday's summit of euro zone leaders.

The debt swap, in which private creditors are to take a 50 percent cut in the nominal value of their Greek bond holdings in exchange for cash and new bonds, is a pre-requisite for the country to secure a 130-billion-euro rescue package.

Prime Minister Lucas Papademos told Reuters in an interview he expects the debt talks to be concluded within days.

"We made significant progress over the last few weeks and in the last few days in particular. We are trying to conclude the discussions as quickly as possible. I am quite optimistic an agreement will be reached in the coming days," he said.

More
Posted by Yulie Foka-Kavalieraki at 1:42 AM