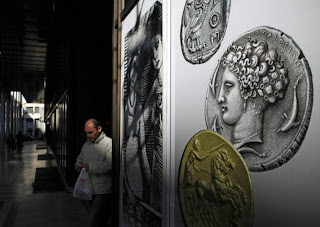 Greece and its private creditors said they expect to complete a debt-swap accord this week after bondholders signaled they would accept European government demands for lower interest rates.

The sides are “close” to completing a voluntary exchange within a framework outlined by Luxembourg Prime Minister Jean- Claude Juncker, the Institute of International Finance, negotiating on behalf of private creditors, said in an e-mailed statement in Athens yesterday.

Creditors are prepared to accept an average coupon of as low as 3.6 percent on new 30-year bonds, said a person familiar with the talks, who declined to be identified because a final deal hasn’t been struck yet.

Juncker, who also leads the group of euro-area finance ministers, said Jan. 24 that bonds issued in the swap should have a coupon “well below” 3.5 percent for the period to 2020 and below 4 percent over the 30 years. As recently as Jan. 23, private investors wanted the new 30-year bonds to have an average coupon of about 4.25 percent, two people familiar with the talks said then. That offer equated to a loss of about 69 percent on the net-present value of Greek debt.

Bondholders agreed with European officials three months ago to implement a 50 percent cut in the face value of more than 200 billion euros ($263 billion) of debt by voluntarily swapping bonds for new securities. A worsening economy since then has made it more difficult to achieve a goal of cutting Greece’s debt to 120 percent of gross domestic product by 2020.