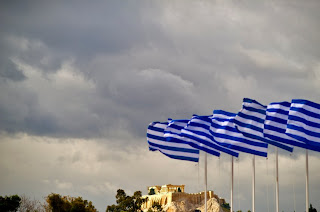 Europe's politicians are losing touch with reality. Greece is broke, and yet Brussels wants to send the country billions in new loans, to which there is growing opposition within the coalition government in Berlin. Rescue efforts are hopelessly bogged down by bickering over who will ultimately step up.

Martial music booms from the loudspeakers as warlike images gallop across monitors. A short euro crisis film montage shows police officers being posted in front of the parliament building in Athens and the jostling of frantic reporters, then US investor George Soros uses grim words in an appeal to rescue the euro zone. "The alternative is just too terrible to contemplate," he says. 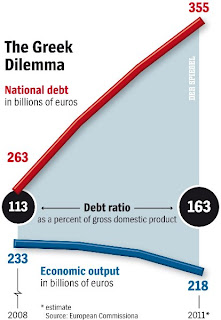 Speaking in a panel that follows the short film, German Finance Minister Wolfgang Schäuble, a member of Chancellor Angela Merkel's center-right Christian Democratic Union (CDU), has a gloomy expression. It is last Friday when the global business elite were at the World Economic Forum in Davos, Switzerland, to discuss the "Future of the Euro Zone." It becomes quickly apparent that Schäuble would have preferred a different opening than the dark film for this event. The negotiations with Athens' private creditors are going well, he says, and he points out that he is "quite optimistic" Greece can be rescued.

But later European Union Economic and Monetary Affairs Commissioner Olli Rehn, standing next to the stage, imparts a very different message to reporters. He concedes that Athens needs money once again, but that he cannot yet reveal just how much. Nevertheless, he adds, it is "likely" that the donor countries will have to come up with "a slightly larger contribution."

Once again, Europe is arguing over a bailout for Greece, and it looks as though the result will be no different that it has been in the past. German Chancellor Angela Merkel opposed lending money to Athens in early 2010, and then the first bailout package for Greece was put together. A year later, she balked at further aid, and then came the second program. Now she is trying to protect the euro zone's coffers once again, though no one in Berlin or Brussels is willing to bet that she will have more success this time around.

Europe's politicians continue to battle reality. Everyone knows that Greece cannot repay its massive pile of debts, now at more than €350 billion ($459 billion). But instead of effectively reducing the financial burden, European politicians intend to approve new loans for the government in Athens and go on fighting debt with new debt. "If the country wants to remain in the euro zone, we should support it," says Austrian Chancellor Werner Faymann. 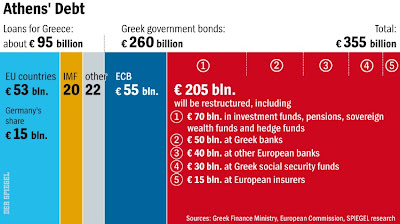 Posted by Yulie Foka-Kavalieraki at 3:30 PM