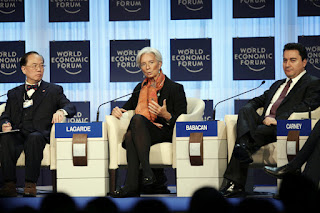 Global finance chiefs warned no economy is safe from Europe’s debt crisis, adding urgency to their calls for its governments to deliver a swift resolution.

Policy makers from Hong Kong to Canada used the last full day of the World Economic Forum to push euro-region counterparts to boost their bailout cashpile to protect Italy and Spain. They also pressed Greece and its creditors to strike a credible agreement to cut the nation’s debt.

Failure to deliver home-grown solutions would cost Europe any chance of further outside support and undermine the International Monetary Fund’s push for more crisis-fighting resources of its own, officials said. The concern tempered optimism from earlier in the week when delegates expressed hope that Europe had succeeded in calming markets after two years of turmoil.

“I’ve never been as scared as I am about the world,” Donald Tsang, Hong Kong’s chief executive, said today in Davos, Switzerland. “Nobody’s immune. You need decisive action. You need to inspire confidence.”

Bank of Canada Governor Mark Carney estimated the European crisis will subtract 1 percentage point from global growth by the end of 2012 “and that’s in a world where this crisis is contained.” Europe’s pain could be transmitted via trade or financial channels with banks already hoarding cash or investing only in domestic markets, he said.