Leaders of 25 European Union governments agreed Monday night on what some billed as a historic pact to move to closer fiscal union and signed off on the details of a permanent bailout fund for the euro zone—yet Greece's looming debt restructuring threw a shadow over the summit.

The leaders discussed Greece but provided no further clarity on the eventual outcome of an issue that was creating increasing nervousness in financial markets Monday.

European stocks fell Monday and the euro lost ground against the dollar, while Portugal's borrowing costs surged, with the 10-year government bond yield reaching euro-era highs. The summit ended after markets had closed in the U.S.

In a joint statement, the EU leaders noted "tentative signs" of economic stabilization in Europe but said financial market tensions continue to weigh on the economy.

The final shape of the deal to reduce Greece's debt is still unknown after months of wrangling between the Greek government, representatives of bondholders, and officials from the EU, the International Monetary Fund and the European Central Bank. 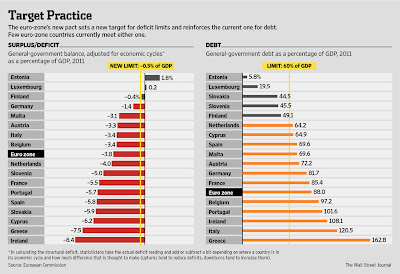