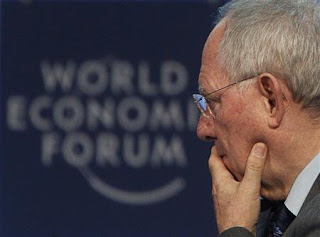 Euro zone finance officials voiced optimism on Friday that a deal to avert a disorderly Greek default was imminent and that key building blocks to resolve Europe's sovereign debt crisis are gradually fitting into place.

Europe's top economic official said an agreement between the Greek government and its private creditors on voluntary losses for bondholders would be complete within days and the euro zone was making progress on strengthening its financial firewalls.

"We are very close to a deal, if not today then over the weekend and preferably in January, not February. We are very close," European Economic and Monetary Affairs Commissioner Olli Rehn told the World Economic Forum in Davos.