An economy crumbles: Uncertainty about whether Greece will stay in the euro is crippling its prospects 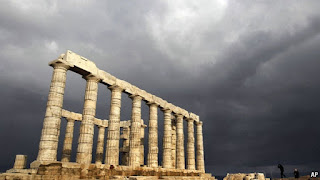 The banners at the entrance to the Bank of Greece museum in Athens promise a “fascinating journey through Greece’s modern economic and monetary history”. How could any passer-by resist? Inside the museum ranks of glass cases enclose an array of coins and old bank notes, as well as the paraphernalia used to make them. The bills range from 5 drachma up to 100m drachma, a reminder that Greece has had problems with inflation in the past. The end of history, at least for this exhibition, is 2001 when Greece adopted the euro. But the country’s present troubles suggest an important chapter to the story of Greek money is still to be written. Some reckon the drachma may roll off the presses again.

This is no longer just a fantasy of diehard sceptics about the euro in Britain and Germany. Even Greeks concede that the big problem afflicting the economy, now in its fifth year of recession, is the uncertainty about whether Greece can stay in the euro and get its act together. Savers are anxious that their cash might be forcibly converted to a new Greek currency. By November the Greek banking system had lost a quarter of the deposits it had two years earlier. To fill the gap, the banks have borrowed €43 billion ($56 billion) of emergency funds from the Greek central bank on top of €73 billion of secured loans from the European Central Bank (ECB). Credit remains in short supply because banks have had to cut loans and raise borrowing costs. Informal credit arrangements between firms are breaking down. Foreign suppliers now demand cash payment upfront, making liquidity even scarcer.

Few investors or businesses are brave enough to make long-term bets on the Greek economy in these conditions. The stockmarket has fallen steeply (see chart 1). “You can buy good companies for pocket money,” says one business chief. Assets are cheap but they would become cheaper still were Greece forced out of the euro. Capital spending is down by almost half from four years ago; house building has fallen by two-thirds. The one bright spot is tourism: visitors to Greece were up by 10% last year, in part because tourists steered clear of the unrest in north Africa.

There are hopes that the economy might recover next year if Greece’s place in the euro is confirmed. Agreement on a big new support package from the euro zone and the IMF would put some minds at rest. But a deal on new money cannot be thrashed out until the IMF in particular is sure that Greece’s public finances are on a sustainable path. 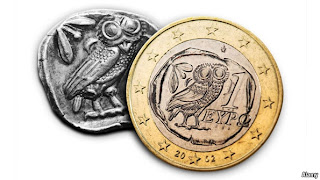 Posted by Yulie Foka-Kavalieraki at 12:00 PM