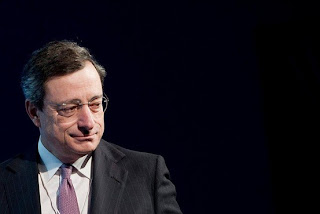 But he didn't take all of the credit. The new ECB chief said governments have made progress in repairing public finances, and praised European leaders for steps they have taken to enhance governance of the euro zone.

"We know, for sure, that we have avoided a major funding crisis," Mr. Draghi said in a question-and-answer session.

He added that it was the ECB's duty to guard against deflation as well as inflation.

Mr. Draghi has won wide praise for overseeing a huge expansion of low-cost loans to euro-zone banks since he took over in November. By cutting interest rates twice and allowing banks to borrow for three years instead of one year, the bank has plowed money into the banking system and eased fears of a financial meltdown.

"The euro area is another world from what it was five months ago," Mr. Draghi said.