The dilemma of German leadership 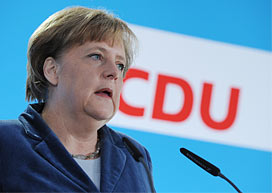 Late last year, at the height of Europe’s sovereign debt crisis, the Polish foreign minister asked for more German leadership in Europe. Nobody with a sense of history could miss the poignancy of his appeal. “I fear German power less than [its] inactivity,” Radoslaw Sikorski said. At the Brussels summit yesterday, Chancellor Angela Merkel secured her crowning triumph: a new fiscal compact agreed by 26 members to enforce German-style budget discipline throughout the eurozone. Yet German leadership comes at a price. The risk is that Berlin’s leadership will, willy-nilly, feed perceptions of German dominance.

The latest spark to anti-German tinders is a Berlin policy document, which contemplates giving an EU commissioner the authority to overrule Athens’ taxation and public spending decisions. It is far from clear that this would differ much from the power that Greece’s official creditor “troika” already enjoys. Moreover, the shortcomings of the Greek rescue programme owe less to the wrong decisions being made at the top than to an inability to have those decisions implemented by Greece’s dysfunctional bureaucracy. Those same bureaucrats would hardly be more eager to follow through on orders from Brussels than Athens.

None of this diminishes the damage done by the political crassness of the proposal. The reaction in the Greek press has been predictably furious. And this is only the last of several unfortunate instances that can easily stoke anti-German sentiment. A nasty war of words between German and Greek tabloids has been going on since the beginning of the Greek crisis: the EU’s shoe-horning into power of two technocrats, Mario Monti and Lucas Papademos, in Italy and Greece; the Irish discovery that German parliamentarians were given drafts of Dublin’s budget before the Dáil; and the insistence on encasing fiscal austerity in a new treaty. Not all of these were caused by Berlin, but they are being interpreted in some capitals as a tightening German grip on other European countries’ affairs.