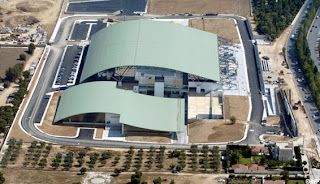 In August 2004, the Galatsi Hall was the scene of table tennis rapture. South Korea’s Ryu Seung-min had just smashed a forehand to beat China’s Wang Hao and claim gold at the Athens Olympics. As Ryu leapt into his coach’s arms, the 6,500-seat facility roared.

Today Galatsi lies silent. A fence encircles the property and the main gate is padlocked. “Nobody’s been here in months,” says a security guard. “It hasn’t been used since the games.”

Galatsi’s fate is emblematic of an array of properties on which Greece spent billions of euros for the 2004 Olympics, which now mostly sit idle or underused.

Such facilities were once a source of national pride – the physical manifestation of a can-do spirit that allowed Greece to overcome doubters and construction delays to stage a well received games. Long after the closing ceremony they were supposed to yield further benefits, either by supporting local athletes or passing into the hands of private developers who could transform them into lucrative commercial properties.

But in a cautionary tale for other Olympic organisers – and a blow to Greece’s grand plan to sell off €50bn in state assets to reduce its crippling debts – many lie in various states of disuse, victims of legal squabbles, local corruption and poor planning.