What Merkel Is Thinking 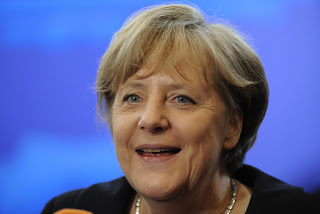 From the secret diaries of German Chancellor Angela Merkel, as authenticated by Oxford Prof. Hugh Grant, author of "How I Spent the Warmedy."

Unbelievable! It's been two weeks and Europe is still burbling about our summit "plan" for future fiscal integration. I guess this is what they mean by Stockholm Syndrome. I thought my fellow leaders understood they were just playing along for my domestic audience. They actually are taking the plan seriously! The British have practically torn themselves up over it. The Czechs are beside themselves at being asked to ratify a "blank piece of paper." Shhh!

I guess this is the downside of being Europe's last solvent big economy. Dependency breeds infantilism! I went to the summit looking for a dog-and-pony exercise to meet my domestic needs. I thought everybody understood that.

My public has no desire to "solve" the crisis right now so I presented them with a purely figurative redesign of European governance as if to say, "Nothing like this will be permitted to happen again." It was just a diversion, a show.

Ha, ha—the situation would be funny if it weren't giving me a headache. The German economy is still ticking over! Employment is strong. Exports are strong. My people see the mess to our south as somebody else's problem.