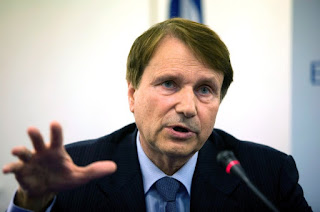 Armed with 45 experts and 30 years of experience, Horst Reichenbach is in Athens to help the Greeks economize and institute reforms. His conclusions about their situation are sobering, but he also reports a new sense of determination for tackling the debt crisis there.

He could have left his winter coat at home, says Horst Reichenbach as he hurries along the palm-lined paths of the National Garden. Even now, in the middle of December, there is hardly a cloud in the sky over Athens. He has no complaints about the weather, at least.

Reichenbach, 66, is the head of the European Commission Task Force for Greece, a group of financial and administrative experts assembled in the summer to help debt-ridden Greeks "do their homework," as he says.

It is his third visit to the Greek capital. A white VW van chauffeurs him and his delegation through Athens, from the Agriculture Ministry to the Finance Ministry, and from the Interior Ministry to the Transportation Ministry -- from one brightly lit Christmas tree to the next.

"It's wonderful that you're here," says the agriculture minister.

"We're happy that you've come," the interior minister calls out.

Reichenbach, tall, slim and always dressed in a dark suit, is friendly but not jovial in his dealings with the Greeks. He is not one for exuberant gestures. He is a civil servant, not a politician. Portraits and flags are always proudly displayed behind the Greek ministers at whose enormous tables he sits, while Reichenbach has a thick, blue cardboard folder in front of him.