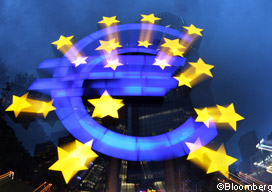 The European Central Bank is expected to report strong demand for an offer of unlimited three-year loans after banks were urged to take the funds as part of concerted efforts to ease severe strains across the eurozone’s financial system.

Lenders across the region have been locked out of public funding markets in recent months due to fears of a worsening of Europe’s sovereign debt crisis. However some banks have historically been keen to avoid turning to the ECB for fear of signalling weakness to their peers.

ECB president Mario Draghi said last week: “We see no stigma attached to the use of central banking credit provisions: our facilities are there to be used.” The ECB announced the emergency three-year loans, known as longer-term refinancing operations, or LTROs, earlier this month, in an attempt to help banks overcome €720bn worth of funding due to mature next year.

The previous largest amount allocated in a single ECB operation was the €442bn in one-year loans offered back in June 2009. Some analysts think demand for three-year liquidity could exceed that figure given current severe financing strains for banks – although the median forecast is lower.