Staring Into the ECB's Mini Bazooka 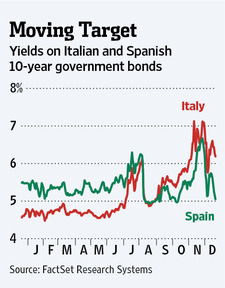 It's the last major scheduled event in the euro crisis-watchers calendar: the European Central Bank will offer banks the first of its unlimited three-year loans Wednesday.

Expectations are building that take-up could be huge as banks come under political pressure to borrow the money to buy government bonds. But while estimates of demand are rising—and yields on government bonds from some financially stressed countries are falling—the bulk of the money is likely to be used to replace maturing funding rather than to buy sovereign bonds.

For the banks, engaging in a sovereign-bond carry trade is superficially appealing. The potential yield pick-up is huge, offering a chance to make big profits: the cost of funds via the Long-Term Refinancing Operation is likely to be around 1%, while yields on 10-year Italian and Spanish bonds are 6.5% and 5%, respectively. And since sovereign bonds are zero risk-weighted, banks face no capital constraints.

Even so, banks may not go as far as French President Nicolas Sarkozy would like. Bonds held in trading books will have to be marked to market, exposing balance sheets to volatility if the crisis deepens; bonds used to raise cash in repo markets are subject to margin calls. Many banks will be nervous about investor reactions to increased exposure to the asset class at the heart of the crisis; others will be concerned about credit risk.