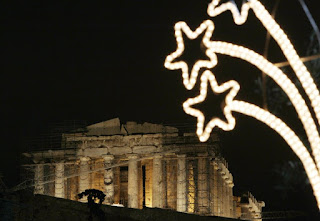 Six weeks after forming a transitional government to overcome its crisis, Greece is still failing to deliver its promised reforms. The cabinet of Prime Minister Lucas Papademos is deeply divided and has lost the public's confidence. Even the most urgent measures have ground to a halt.

The president of Greece's SEV business federation, Dimitris Daskalopoulos, recently invited journalists to his imposing neoclassical headquarters in Athens. He straightened his tie, leaned forward and with a grim expression spoke into half a dozen microphones arrayed in front of him. "Now the issue is simply whether we remain in Europe or not. The governing parties have an obligation to work together honestly to finally banish the nightmare of a return to the drachma. If this government doesn't get it right, Greece will go hungry."

His dramatic appeal was ignored, once again. The Socialist PASOK party, the conservative-liberal New Democracy party and the far-right LAOS party formed a transitional government six weeks ago under non-partisan former central banker Lucas Papademos. They vowed to avert a looming state bankruptcy. But they remain as divided as ever.

Instead of getting down to business, they are absorbed in policy wrangling that seems absurdly trivial given the scale of the tasks they face. At a cabinet meeting last Thursday, Finance Minister Evangelos Venizelos and Transport Minister Makis Voridis of LAOS fell out over a draft law to accelerate amicable divorces. Marriage, Voridis argued, was "a central component of our value system" -- therefore LAOS could not agree to the law. Papademos remained silent.

This isn't the first time the LAOS minister has blocked a decision. Recently he resisted the complete liberalization of the issue of taxi licenses, and publicly threatened to resign.