Interview with Ex-Greek Prime Minister: 'The EU as an Institution Is Still too Slow' 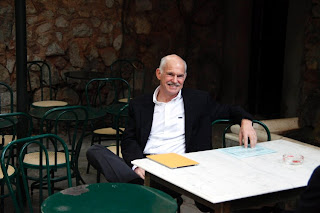 In a SPIEGEL interview, former Greek Prime Minister Giorgios Papandreou explains for the first time the reasons behind his surprising resignation and the new hope for national unity in Greece. He also advocates the implementation of euro bonds, saying it's time for European solidarity in the financial crisis.

SPIEGEL: Mr. Papandreou, two weeks ago you were forced to resign to make way for Lucas Papademos, a banker. Combined with Spain and Portugal, that means that three of the last remaining leftist governments in Europe have fallen victim to the euro crisis. Could it be that socialists are in fact not very good at handling money and financial problems, as the financial world likes to claim?

Papandreou: We socialists have very clear ideas about what needs to be done in times of crisis. The fact that our voices were not taken seriously enough in the past is one of the reasons why we are still so deeply caught in the crisis.

SPIEGEL: So once again, it is the others who are to blame?

Papandreou: No. Of course we need strict budgetary discipline, and we have to reduce expenditures, but we also need growth strategies. And we cannot lose sight of the markets, either. It is unacceptable that they are the ones driving the countries, day after day, hour by hour, not giving their governments the time that democratic institutions need. This undermines our democratic foundation. That's why we need strict regulation of the markets and more transparency, and why we have to contain the rating agencies. We, as socialists, have demanded this again and again, because we cannot do this alone as a single country. This is a mistake being made by the global political class and, in particular, by conservative Europe.

SPIEGEL: Still, in the crisis voters apparently have more confidence in the conservatives, no matter what political responsibility they might bear. Isn't this a disappointment for you?

Papandreou: We were voted into office in the midst of a crisis. And the outcome of the election was also a vote against the conservatives, who are responsible for the debts and the high deficit. The conservatives overshot the Greek budget by €26 billion ($35 billion) in a single year. If we'd had the current strict supervision by the EU a few years earlier, these problems would not exist in Greece today.