Interview with Ex-German High Court Justice: 'It Is a Mistake To Pursue a United States of Europe' 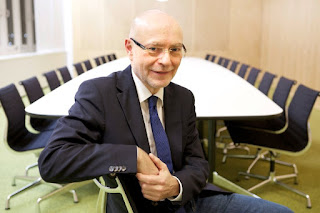 In an interview conducted as he heads into retirement, German Constitutional Court Judge Udo Di Fabio explains why he believes the high court's recent decisions on the European Union will not necessarily hinder further European integration and how he believes debates over possible changes to Germany's constitution to strip power from Karlsruhe are "phoney."

The Lisbon Treaty, which went into effect on Dec. 1 2009, represents the last major reform of the structures of the European Union. Germany's Federal Constitutional Court subsequently issued a landmark decision on the treaty, authored by Judge Udo Di Fabio, which stated that the Treaty conformed with Germany's constitution. Nevertheless, the court also underscored that the parliament in Berlin must have greater participation in decisions made by the country at the EU level. Many politicians and journalists believe the ruling could hinder a future deepening of European integration.

In an interview with SPIEGEL, Di Fabio discusses why he believes the Lisbon ruling isn't nearly as critical of the EU as some have interpreted and why strong democratic states are essential to a continuing integrated Europe.

SPIEGEL: Professor Di Fabio, you were the German Constitutional Court's expert on Europe and the author of the controversial decision on the Lisbon Treaty, which has governed the workings of the European Union since 2009. Will politicians in Berlin heave a sigh of relief now that you are retiring from the court?

Di Fabio: I can't imagine that they will. A chamber of the Constitutional Court is a collective decision-making body. You shouldn't overestimate the power of a single judge.

SPIEGEL: Does the government still have to fear that the court in Karlsruhe will put the brakes on European integration?

Di Fabio: I don't think that the Constitutional Court stands in the way of integration efforts. In many respects the court has even strengthened Germany's position.

SPIEGEL: But your president, Andreas Vosskuhle, only recently said with regard to further integration steps that the scope of Germany's constitution, the Basic Law, had been "largely exhausted."

Di Fabio: I think such statements concern sweeping transfers of responsibilities that are currently not up for debate.