Governments have collapsed. Bailouts have run into the hundreds of billions of euros. Greece is drowning in debt, Italy ousted longtime leader Silvio Berlusconi in a bid to claw its way out, and Spaniards rejected the ruling Socialists, hoping that political change might spare them the woes of their neighbors. Still, the two-year debt crisis builds. How did the eurozone get here?

The graphics below paint part of the picture: untaxed shadow economies, low productivity, and deficit spending. While deficits have been curtailed significantly since 2009 due to austerity measures, some see deeper systemic problems.

Take Greece. "For 10 years, investors basically believed that Greece was Germany," says Jacob Kirkegaard, of the Peterson Institute for International Economics in Washington. But, he says, Greece is "fundamentally a corrupt, dysfunctional government that is unable to raise enough tax revenue to pay for all of its expenses." Then there's Spain. The size of its debt relative to its economy is a manageable 67 percent, but sluggish growth undermines investors' faith that it can repay loans. Those who lost money in Greece are in no hurry to lose more in Spain.

Debt as a percentage of GDP

The maximum debt allowed by the European Union is 60 percent of gross domestic product. None of the countries pictured meet that standard. 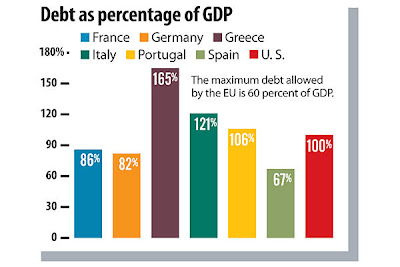 Deficit spending as a percentage of GDP

Deficit spending occurs when a country spends more than it generates in revenue. The maximum deficit spending allowed by the EU is 3 percent of GDP. As shown here, countries sometimes approached zero, or even spent less than they took in, but none of them are breaking even in 2011. Deficit spending has declined with the implementation of strict austerity programs. 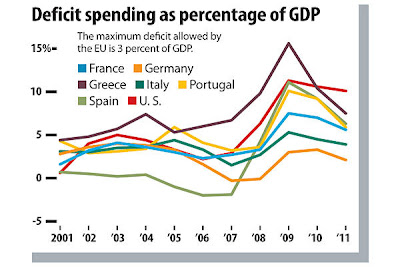 The "shadow economy," also known as the "underground economy," is largely untaxed because transactions occur outside the normal channels, which undermines the government's ability to collect revenue. The shadow economy is not just the black market – it can include things like domestic work that employers pay for in cash. 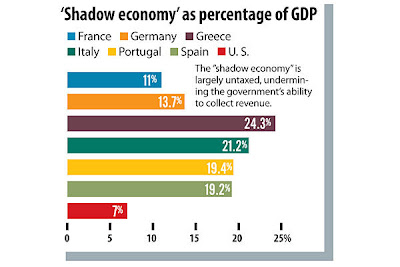 Exports as a percentage of GDP

Part of Europe's problem is that today few of the countries have major export bases. Germany remains an export-based economy, but that is not the case in most of the eurozone. A key question when looking at the eurozone, says Kirkegaard, is “Does this country have anything that the world wants to buy?” In many cases, the answer is, "Not much." 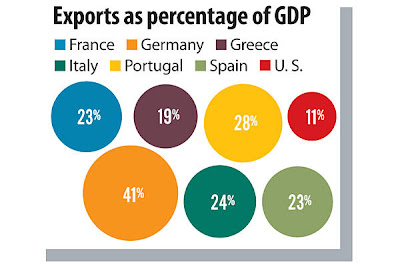 Size of the public sector 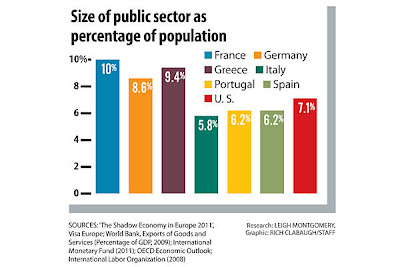