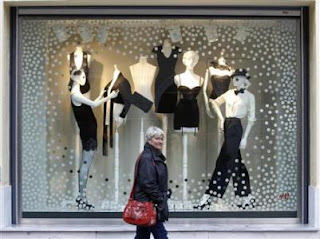 Greece's stores had their worst Christmas in decades, with retail sales dropping by 30 percent compared with the same period last year as the economic crisis shattered consumer confidence, the ESEE retail federation said on Tuesday.

"Nine out of 10 Greeks are less generous, not out of choice but out of necessity," ESEE said. "Retailers endured a Christmas gloom that chipped away any optimism they had before the holidays."

The sharp drop in sales came despite widespread discounts by retailers in the run-up to Christmas.

Greeks have been suffering wage and pension cuts, rising inflation and a recession now into its fourth year, which has slashed living standards and forced them to cut spending.

Clothing and footwear sales dropped 40 percent, electrical goods by 30 percent, and sales in the food and drinks sector by 15 percent compared with the same period last year, ESEE said.