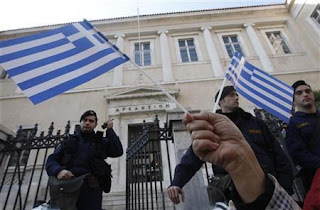 Talks over restructuring part of Greece's massive public debt ran into trouble on Tuesday as one fund walked away from negotiations, fuelling growing doubts about whether a deal that is crucial to a new bailout agreement can be reached this year.

They said the disagreement stemmed from differences over how to proceed with a voluntary bond swap, although there were no more precise details. Vega, the only fund represented on the steering committee, declined to comment.

Greek Finance Minister Evangelos Venizelos put a brave face on the tense discussions, saying he was confident that negotiators were close to an agreement, but there was much less optimism from bankers who have been following the talks.

"I can't see any deal this year," said one senior banker with knowledge of the discussions.