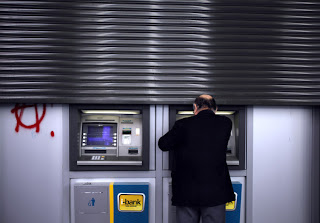 Greece’s creditors are resisting pressure from the International Monetary Fund to accept bigger losses on holdings of the indebted nation’s government bonds, said three people with direct knowledge of the discussions.

Lenders want the 70 billion euros ($91 billion) of new bonds the government will issue in return for existing securities to carry a coupon of about 5 percent, said the people, who declined to be identified because the negotiations are private.

The IMF is pushing for creditors to accept a smaller coupon in order to reduce Greece’s debt-to-gross domestic product ratio to 120 percent by 2020, a key element of the Oct. 27 agreement by European Union leaders, the people said. National Bank of Greece SA’s Chairman Apostolos Tamvakakis told shareholders in a meeting in Athens today that he hopes talks on the debt swap will end soon.

Greece’s debt will balloon to almost twice the size of its economy next year without a write-off accord with investors, the IMF said on Dec. 13. The IMF and EU leaders are trying to bring the country’s debt down to a sustainable level.

The 46-member Bloomberg Europe 500 Banks and Financial Services index traded up 2 percent in London. The measure is down 32 percent this year.

As part of Greece’s 130 billion-euro second bailout, investors would take a 50 percent hit on the nominal value of 206 billion euros of privately owned debt. Exchanging bonds for securities with a 5 percent coupon would leave investors with a 65 percent loss in the net present value of their holdings of Greek government debt, the people said.