Greece must not leave asylum seekers at the mercy of extremists 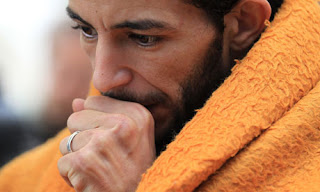 On the morning of 25 May, Kelly from Ghana was on the bus going to a pickup place at the outskirts of Athens, where African immigrants and asylum seekers go to look for work, when he was attacked by a mob. He saw them from afar, standing at the bus stop – a group of about 10 young men – but thought nothing of it. They were probably going to one of the demonstrations, he supposed. But as they entered the bus, they pulled out bats, iron rods and knives, and attacked him.

As Greece struggles to avoid economic meltdown, dark-skinned immigrants and asylum seekers have become scapegoats in racially motivated attacks that, according to the United Nations high commissioner for refugees, have become an almost daily occurrence in Athens.

Last week, in cases pertaining to asylum seekers caught entering the UK and Ireland, the European court of justice upheld that asylum seekers could not be sent back to Greece because they risk being subjected to "inhuman or degrading treatment".

Ninety per cent of undocumented immigrants enter the EU via Greece. The Greek response has been to announce the construction of a barbed wire wall on the Turkish border, though the EU has made clear that such a wall will receive no funding. The influx of migrants has not been welcomed by some segments of the Greek population. Thus the extreme rightwing party Golden Dawn won its first ever seat on the Athens city council in November 2010 on an anti-immigrant agenda.