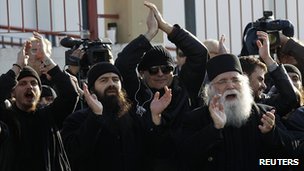 The abbot of the prestigious Vatopedi monastery on Mount Athos in Greece has been jailed pending trial for alleged fraud and embezzlement.

Abbot Ephraim, 56, is accused of arranging land swaps between Vatopedi and the state which are thought to have cost the government millions of euros.

The abbot, now being held in Korydallos prison in Athens, denies wrongdoing. His arrest has triggered protests.

The property scandal contributed to the conservative government's fall in 2009.

Greek Orthodox monks rallied outside the prison in support of Abbot Ephraim on Wednesday.

No trial date has been set yet.