Here's a contrarian thought to start the holidays: What if the euro zone actually survives?

Recent market commentary has been so unremittingly gloomy that it is easy to forget the euro zone has so far sailed through several apparent deadlines —"six weeks to save the euro", "10 days to save the euro"—without falling apart. Could the single currency yet defy what appears to be the overwhelming consensus and hold together in 2012? 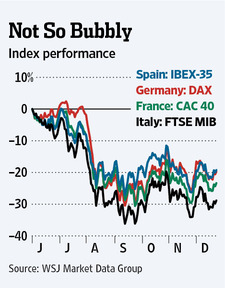 For the first time since the start of the crisis, policymakers may be finally recognizing the scale of the crisis. Certainly, a lot has changed since the disaster of October's Cannes summit, which ended in disarray after the Greek prime minister announced plans to call a referendum on the country's austerity program.

First, Greece and Italy now have new technocratic governments—backed by cross-party parliamentary support—committed to implementing both austerity measures to curb deficits as well as growth-enhancing structural reforms. Spain and Belgium also have new reform-minded governments. This means that all the main crisis countries are now taking steps to address the core competitiveness challenges at the heart of the situation.

Second, the euro zone countries have committed to tough new rules designed to ensure future fiscal discipline backed up by near-automatic sanctions for transgressors. Sure, the new rules won't solve the current crisis and one can debate whether they are the right ones from an economic perspective. But there is no doubt they represent a significant sacrifice of sovereignty and will be harder to break than the old Stability and Growth Pact. Delivering these reforms would be a powerful demonstration of commitment to preserve the single currency.