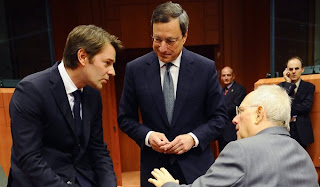 With the euro zone debt crisis worsening by the day, finance ministers from the 17 countries that use the currency approved more loans on Tuesday to stave off a Greek default and agreed to bolster their bailout fund.

Speaking after the meeting, Jean-Claude Juncker, who heads the euro zone finance ministers, said they had agreed to release their portion of an 8 billion-euro loan to Greece. The International Monetary Fund is expected to sign off on its share — roughly one third — early next month, making the loans available by the middle of December.

The ministers also agreed on rules to increase the firepower of their bailout fund, the European Financial Stability Facility, and will be able to offer insurance to those buying the bonds of nations like Spain and Italy. In these cases, insurance certificates — attached to make bonds more attractive — will themselves be tradable, said Klaus Regling, who heads the bailout fund. The fund will also seek investment from sovereign wealth funds and other non-European sources.

Though a goal of 1 trillion euros, or $1.3 trillion, was set for the expanded bailout fund, ministers acknowledged that this was now unlikely, and no figure was given at Tuesday night’s news conference.

More
Posted by Aristides N. Hatzis at 8:32 AM