Hundreds of euro-zone lenders took out €489.19 billion ($640 billion) in low-interest loans from the European Central Bank on Wednesday, as the currency area extended a massive financial lifeline to its struggling banking industry.

The unexpectedly heavy demand from 523 banks for the three-year loans highlighted the severity of Europe's financial crisis, while also stirring some hopes that the action could help defuse it, or at least prevent it from getting worse.

Investors didn't seem convinced that the loans would drastically improve banks' prospects. After rallying when the ECB announced plans for the program earlier this month, the Euro Stoxx Bank Index fell 1.5% on Wednesday. In a mildly bearish sign about prospects for the euro debt crisis, yields on Italian and Spanish bonds inched higher.

The ECB's loan program—the first in which it has offered three-year loans—appears to be the central bank's main weapon, at least for now, in combating Europe's crisis. The ECB has resisted pressure from politicians and market participants to aggressively buy euro-zone government bonds, arguing such a move is outside its purview. But if the central bank eases fears about the Continent's banks, that would go a long way toward relieving anxiety about many countries' overall financial health. 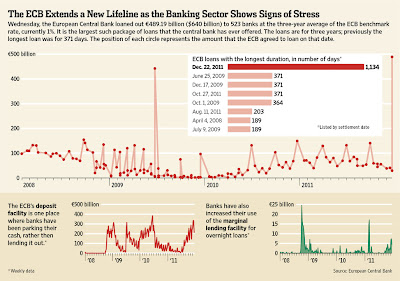 Posted by Yulie Foka-Kavalieraki at 7:50 AM