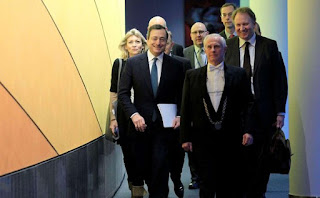 After long resisting the kind of financial force Washington used at the height of the financial crisis in 2008, European central bankers on Wednesday pumped nearly $640 billion into the Continent’s banking system. The move raised hopes that the money could alleviate the region’s credit squeeze.

Though it is too soon to gauge any longer-term benefits, the move, by the European Central Bank, could be a turning point in the Continent’s debt crisis — a cascading problem that for nearly two years has plagued financial markets around the world and now threatens global economic growth.

American officials and global economists have long urged the Europe’s central bank to take just such an aggressive stance — even as European political leaders have repeatedly failed to devise concrete near-term plans to address Europe’s debt problems and deteriorating finances.

Carl B. Weinberg, chief economist at the consulting firm High Frequency Economics and a professed bear on the European outlook, said he was stunned by the size of the monetary operation, saying it suggested that Europe’s central bank had “shown a path toward averting catastrophic collapse in Europe.”