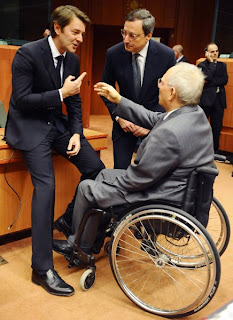 Euro zone finance ministers agreed on Tuesday night on measures to boost the euro backstop fund. But with the crisis rapidly worsening, the IMF may increase aid to the stricken currency union. European currency commissioner Olli Rehn says the euro is entering a critical 10-day period that may determine its fate.

Finance ministers from the 17 member-states of the European common currency zone have fulfilled their promise. On Tuesday evening in Brussels, the so-called Euro Group, a collection of euro-zone finance ministers, agreed on measures to increase the impact of the euro backstop fund, the European Financial Stability Facility (EFSF). The hoped-for result is a boosting of the fund far beyond its current lending capacity in order to assist heavily indebted euro-zone countries.

But in an apparent recognition of the drastically increasing severity of the financial crisis battering Europe, Euro Group President Jean-Claude Juncker said that the possibility of greater International Monetary Fund (IMF) involvement was being explored.

"We also agreed to rapidly explore an increase of the resources of the IMF through bilateral loans, following the mandate from the G-20 Cannes summit, so that the IMF could adequately match the new firepower of the EFSF and cooperate more closely," Juncker said.

According to a statement released by the EFSF on Tuesday evening, the fund will provide a kind of "first-loss" insurance to investors in state bonds issued by euro-zone member states. The measure will cover between 20 percent and 30 percent of losses in the case of a state insolvency and is intended to encourage investors to buy sovereign bonds from countries such as Italy, Belgium and Spain, which have recently struggled under exorbitant interest rates being demanded for their bonds.