Greece Turns to Energy as its Economic Savior 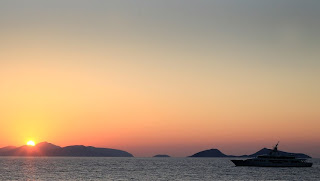 Greece's economy is in ruins, crushed by the country's vast debt load. But government officials say that energy may offer a way out of the mess. And the country isn't picky. Athens is looking to develop renewable energy sources at the same time as it explores for oil.

In Greek mythology, the sun God Helios, son of Hyperion, drove his chariot across the sky from east to west each day.

Now, energy officials in the financially beleaguered nation are naming a major solar project after Helios and banking on energy more broadly as a possible way out of the financial crisis. That means exploring Poseidon's domain of the sea by expediting plans for oil exploration, offshore wind energy production and, possibly, as a future natural gas hub. It also means completing oil and gas pipelines and privatizing state-owned oil, gas and power concerns.

"Energy is one of the key driving sectors of the economy, much more today than it has been in the past," George Papaconstantinou, Greece's minister for the environment, energy and climate change, told SPIEGEL ONLINE. If you exclude traditional sectors such as tourism, he said, energy "is probably the most dynamic sector, at the moment, in Greece. And it's the one that will be driving investment in 2012 and beyond."

The potential upside for the economy is direly needed. The country of roughly 12 million borrowed its way to near oblivion in recent years, amassing €204 billion ($267 billion) in debt by 2006 and running large budget deficits. Greece's public debt rose to 160 percent of gross domestic product in 2010, putting it at the forefront of the world's most indebted economies. The European Union and its member states created two massive loan packages totalling roughly €220 billion in the past year and forced creditors to accept a 50 percent debt haircut, aiming at helping Greece reduce its debt to GDP ratio to 120 percent by 2020. But amid cost cuts and privatizations, the country must also create growth that raises revenue and reduces unemployment, which topped 16 percent this year.

In a September report called "Greece 10 Years Ahead," the consulting firm McKinsey & Co. suggests that the energy sector could provide some relief. Jobs in the sector should rise to 360,000 by 2021, up from 240,000 in 2010, the study forecast. It also said that energy would be the second largest growth opportunity behind tourism in a scenario which foresees the country adding $59 billion worth of annual GDP to its economy by 2021. Such development, the report notes, won't make Greece an energy behemoth but it would still go "a long way towards curbing the large deficits currently crippling the economy."