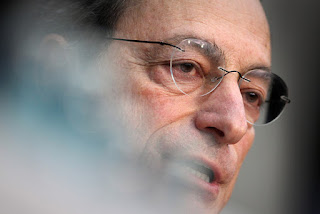 Bring out the punch bowl, Mario. The European Central Bank this week splashed out €489 billion ($638 billion) in three-year loans to 523 banks across the Continent. Overnight, this new long-term lending program produced the single biggest liquidity injection in ECB history, a huge boon to banks that have struggled to fund themselves in private markets.

The injection of money, with another three-year auction due in February, reduces the short-term risk of a liquidity-driven banking meltdown in the euro zone. But it won't solve Europe's sovereign-debt problem.

ECB President Mario Draghi has been at pains to point out that this sort of lending to banks is a normal central-bank function. By making liquidity available to banks, and at the same time easing its collateral requirements, the ECB is reducing the banks' cost of funds and—at least in the short term—the risk of a Lehman-type bank run in the euro zone.

Fine and well. But nobody should think this ECB exercise is cost- or risk-free. The central bank's 1% lending rate is a long way from Walter Bagehot's penalty rate, and thus amounts to a de facto bank subsidy. The ECB has also reduced its collateral standards so low—to single-A asset-backed securities in some cases—that it runs the risk of losses down the road. This too is a backdoor bank rescue.

More
Posted by Yulie Foka-Kavalieraki at 8:32 AM