Dithering at the Top Turned EU Crisis to Global Threat 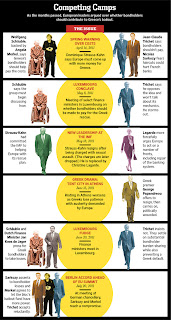 At a closed-door meeting in Washington on April 14, Europe's effort to contain its debt crisis began to unravel.

Greece, the country that triggered the euro-zone debt crisis, would need a much bigger bailout than planned, Mr. Strauss-Kahn said. Unless Europe coughed up extra cash, the IMF, which a year earlier had agreed to share the burden with European countries, wouldn't release any more aid for Athens.

The warning prompted a split among the euro zone's representatives over who should pay to save Greece from the biggest sovereign bankruptcy in history. European taxpayers alone? Or should the banks that had lent Greece too much during the global credit bubble also suffer?

The IMF didn't mind how Europe proceeded, as long as there was clarity by summer. "We need a decision," said Mr. Strauss-Kahn.

It was to be Europe's fateful spring. A Wall Street Journal investigation, based on more than two dozen interviews with euro-zone policy makers, revealed how the currency union floundered in indecision—failing to address either the immediate concerns of investors or the fundamental weaknesses undermining the euro. The consequence was that a crisis in a few small economies turned into a threat to the survival of Europe's common currency and a menace to the global economy.

Posted by Yulie Foka-Kavalieraki at 8:08 AM