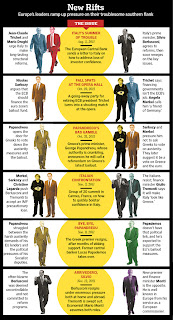 On a chilly October evening in her austere chancellery, Angela Merkel placed a confidential call to Rome to help save the euro.

Two years after the European debt crisis erupted in little Greece, the unthinkable had happened: Investors were fleeing the government debt of Italy—one of the world's biggest economies. If the selloff couldn't be stopped, Italy would go down, taking with it Europe's shared currency.

Her phone call that night to the 16th-century Quirinale Palace, once a residence of popes, now home to Italy's octogenarian head of state, President Giorgio Napolitano, trod on delicate ground for a German chancellor. Europe's leaders have an unwritten rule not to intervene in one another's domestic politics. But Ms. Merkel was gently prodding Italy to change its prime minister, if the incumbent—Silvio Berlusconi—couldn't change Italy.

Her impatience shows the extent to which Italy's woes undid Europe's strategy to fight the crisis. Until then, Europe had followed a simple formula to preserve the euro: The financially strong would save the weak. But Italy, with nearly €2 trillion, or about $2.6 trillion, in national debt, was simply too big to save.

This Wall Street Journal reconstruction, based on interviews with more than two dozen policy makers, including many leading actors, as well as examinations of key documents, reveals how Germany responded to the dangers in Italy by imposing its power on a divided euro zone. Ms. Merkel, widely criticized for not dealing forcefully with the crisis in its early phase, was at the center of the action, grappling with personal tensions and Byzantine politics among the 17 euro nations.

Posted by Yulie Foka-Kavalieraki at 7:34 AM