Armies of the unemployed 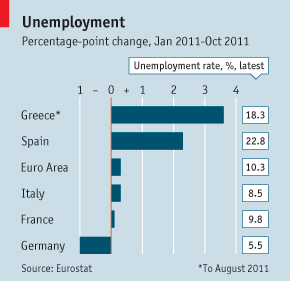 Labour markets in the euro zone suffered about as badly during the Great Contraction as did the labour market in America. Both economies saw a surge in the unemployment rate that topped out above 10%, and both economies then experienced a slow but steady decline in the rate of joblessness. But where unemployment in America seems to have temporarily leveled off at around 9%, the rate of joblessness in the euro zone is once again rising. As of October, the unemployment rate in the single-currency area was back to 10.3%.

There are several striking facts about recent movements in euro-zone labour markets. The first is the remarkable extent to which increased joblessness is due to deteriorating conditions around the periphery. Since the beginning of the year, Greek unemployment is up nearly 4 percentage points. The jobless rate in Germany, by contrast, has fallen a full percentage point over that period (see chart).

Much of the decline in German unemployment occurred early in the year, when the economy's export machine was running hot. It is interesting to see the extent to which this trend has continued, however. In September, new industrial orders in Germany fell 4.4%, yet from September to October Germany's unemployment rate dropped, from 5.7% to 5.5%. It's no wonder that there is less of a sense of urgency to the crisis in Germany.