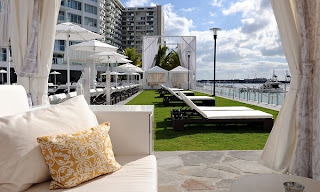 As Europe struggles with its debt crisis, American businesses and financial firms are swooping in amid the distress, making loans and snapping up assets owned by banks there — from the mortgage on a luxury hotel in Miami Beach to the tallest office building in Dublin.

The sales are being spurred on because European banks are scrambling to raise capital and shrink their balance sheets, often under orders from regulators. European financial institutions will unload up to $3 trillion in assets over the next 18 months, according to an estimate from Huw van Steenis, an analyst with Morgan Stanley.

This month a team of three bankers from the London office of the buyout giant Kohlberg Kravis Roberts headed to Greece to examine a promising private company that cannot get Greek banks to provide credit for future growth. The Blackstone Group agreed to buy from the German financial giant Commerzbank $300 million in real estate loans that are backed by properties, including the Mondrian South Beach hotel in Florida and four Sofitel hotels in Chicago, Miami, Minneapolis and San Francisco. Commerzbank is under pressure from regulators to raise 5.3 billion euros ($6.9 billion) in new capital by mid-2012.