Time to Think the Unthinkable on the Euro 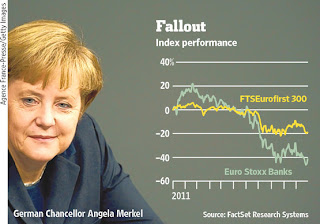 One striking feature of the euro crisis is how fast the unthinkable has become mainstream. Until the Cannes summit a month ago, a euro-zone breakup was considered a tiny probability. Now every investor is discussing the implications of a possible breakup.

Last week, the U.K. Financial Services Authority publicly advised banks to draw up contingency plans. But what should banks and governments be doing?

The short answer is that planning relies on a large amount of guesswork, given the extreme uncertainties and potential outcomes. A breakup can cover anything from the exit of one country to a complete dissolution and return to national currencies. Much also depends on the European Central Bank: If it sticks strictly to its rule book and denies countries in default access to funding facilities, a breakup would be even more disorderly. An added complication is that policy makers and banks are reluctant to discuss contingency plans— or commit anything to paper—for fear of fueling the crisis.