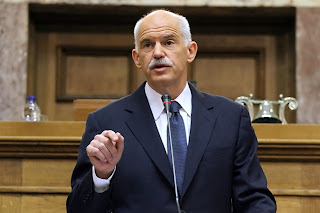 Greek Prime Minister George Papandreou pledged to put the European Union’s new agreement on financing for Greece to a referendum, saying Greeks will give him the support to forge ahead with economic reforms.

“For the new agreement, we must go to a referendum for Greeks to decide,” Papandreou told lawmakers of his ruling socialist Pasok party in statements carried live today from Athens on state-run Vouli TV. “Democracy is alive and well and Greeks are being called to rise to a national duty beyond the regular electoral processes.”

Papandreou’s gambit risks pushing the country into default if rejected by voters and raises the ante with dissidents inside his own party. Papandreou’s popularity has plunged after a raft of austerity measures cut pensions and wages, increased taxes and sparked a wave of social unrest. An opinion poll published Oct. 29 showed most Greeks believe the accord on a new bailout package and a debt writedown is negative.

“Papandreou could lose the referendum, which means that new elections would have to be called,” Thomas Costerg, European economist at Standard Chartered Bank in London, said in an e-mail. “Heightened Greek uncertainty could propagate to other fragile euro-area countries, in particular Italy.”